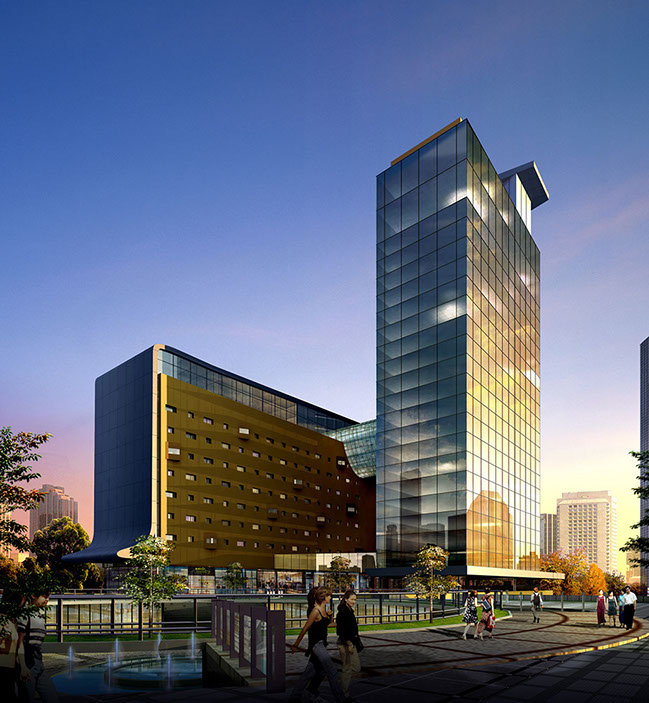 Urbane. Discerning. Style-conscious. In a word: “hip.” To be located in the booming new urban district of Qingdao, the de Biz Hotel’s design creates a progressive architectural image distinctive from most Chinese office designs—an image that projects a sophisticated international outlook.

The de Biz Hotel complex will feature two separate towers: one serving as the office tower (including service office suites) and the other housing a four-star business hotel. The complex will also feature shops and restaurants on the ground level, along with a health and fitness club and three levels of basement parking. These elements come smoothly together to create what will be a prototype concept for a new hotel brand that supports a fashionably modern business lifestyle.

The sleek building design, with its monolithic glass skin, painted masonry accent wall, and unifying metallic wrap, reflects a contemporary German influence that resonates Qingdao’s extensive German cultural and architectural heritage during the late 19th and early 20th centuries. At the same time, the stylish design echoes the city’s reputation as a local center for the appreciation fine art.

Among the de Biz Hotel’s most striking architectural forms is the tear-shaped “green” glass structure element which bridges the hotel tower and the office tower and contains the complex’s business center. The structure’s energy-efficient opaque glass roof lowers the temperature of the business center and reduces cooling costs, while the mirrored underside of the structure creates an intriguing illusion, making it appear to observers in the plaza below that people are “walking on the ceiling” of the business center. The effect is particularly eye-catching at night, when the de Biz Hotel becomes an iconic landmark for the new urban district of Qingdao, China.