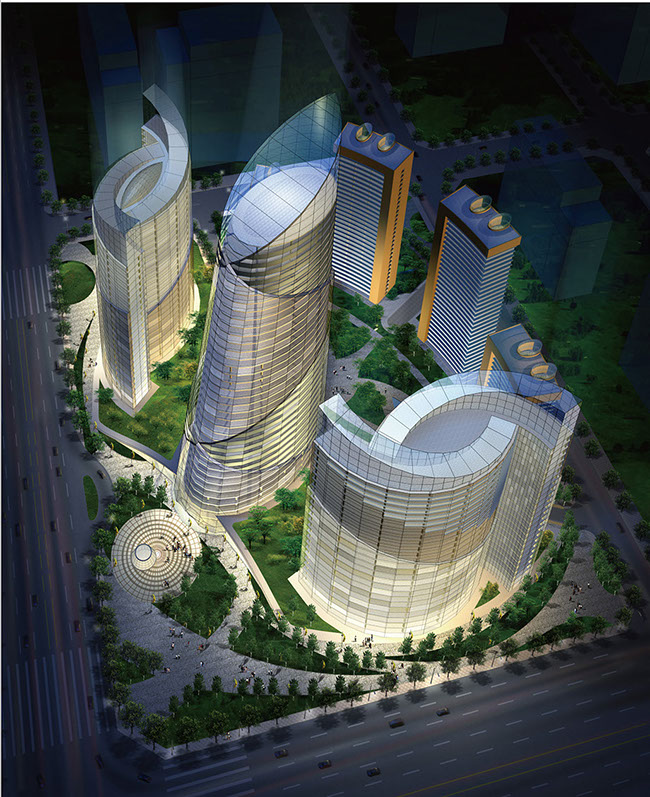 Ordinarily, media companies are expected to create headlines about others. But the master design plan for China’s Publishing Pinnacle media corporation may soon be making headlines of its own. The boldly modern design for the new mixed-use complex promises to become a significant architectural landmark on the Shenyang horizon, with sweeping curvilinear forms that suggest the far-reaching potential of 21st-century China’s media industry.

The centerpiece of the Publishing Pinnacle complex will be the Pinnacle Media Tower, featuring a distinctive façade designed to symbolize a sheet of paper wrapping around a set of printing drums. The Media Tower gradually tapers at the top to house the “Press Club”—an executive restaurant and lounge.

The complex also includes a hotel tower with a dramatic atrium lobby that soars to a rooftop skylight high above, and a set of general office buildings that echo the contours of the hotel while reversing the glazing pattern for a pleasing visual contrast. The complex’s apartment towers, meanwhile, are designed to respect the area’s existing residential buildings while their careful positioning minimizes shading by the adjacent buildings and maximizes sunlight. Natural light also pours generously into the below-ground sections of the retail, entertainment and transportation center via a circular “light well” and pedestrian entrance.